In the Cave with Dave 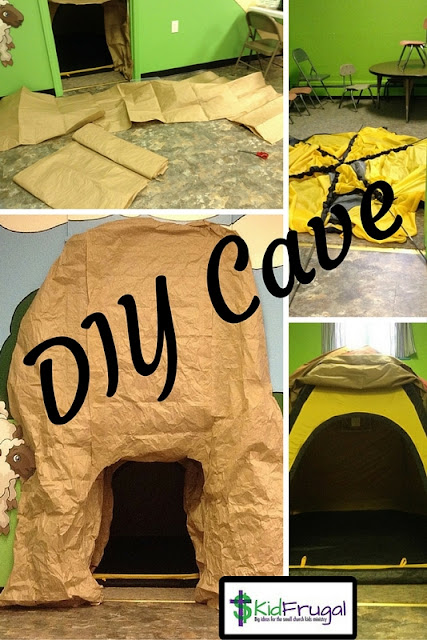 This pup tent someone gave me years ago has really come in handy. It has served as the giant fish that swallowed Jonah, the base camp for Joshua during several of his battles and most recently it became
a cave. 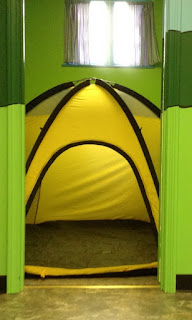 To make the cave, I set the tent up about 3 feet into a classroom. I have black tablecloths at home which would have been perfect to cover it with to make it dark inside. However, that is exactly where the cloths were, so I had to improvise and use everything I could find in church resource room. You can see that the old sheets and other things I found did the job below. 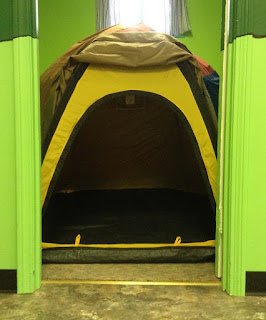 Next, I built the entrance to the cave. I found some dowels in the resource room and duct tape. Duct tape is a children's director's best friend. In fact, I think it is indispensable to anyone. I once saw an entire underground station duct taped together in London. As long as it isn't the airplane wing on a
plane I am flying in, I guess I am OK with it. So below you can see how I duct taped the dowels to the door frame. 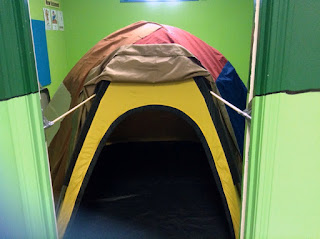 Next came the fun part. I had all of this reclaimed brown packing paper I had dutifully saved from packages we had received. I crumpled it up to give it a textured effect and then flattened it out. I built the entrance way first. I just draped paper over the 2 dowels and down to the floor. I secured it with some duct tape on the rods and masking tape on the door frame. 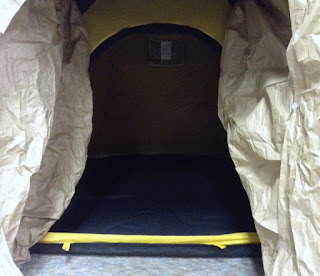 Next, I taped 3 long strips together, sketched out a cave opening and then cut out opening. I taped the whole thing up with masking tape. I actually used the blue painters masking tape. It works very nicely. 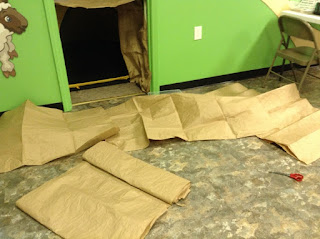 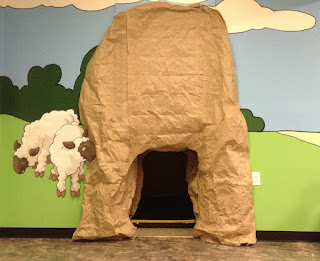 We acted out the story of David being in the cave when King Saul came in to relieve himself. We used a large, rectangular piece of cloth to make Saul's robe and just cut a slit in it for his head. That way "David" could actually cut off a piece of his robe.

I did not bother to write out a script, we just went over the story in the Bible and then acted out part of it. Since the cave was small, I divided the class in half and we did it twice.

I use the Power Point slides from Free Bible Images to go over the Bible story with the kids. As usual, I always add speech bubbles and use the animation features to have the characters carry on conversations. 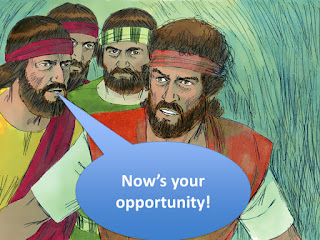 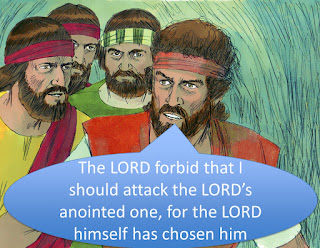 Then you can discuss David's opportunity to retaliate and why he did not. This story shows tremendous restraint on David's behalf, due in part to his high respect for God making Saul king.