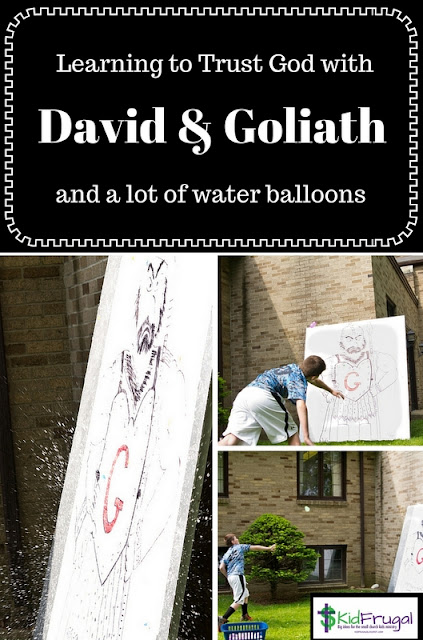 David and Goliath is a great lesson on proportion. Do we sometimes see things out of proportion? All the time. You know why? Because we leave God out of the picture. This is one of the lessons we can learn from David's response to the Goliath situation. And why not have a little
fun while we are doing it? 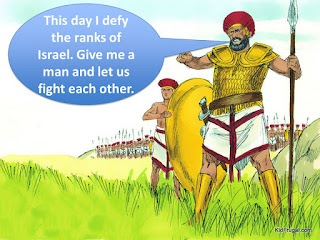 So, first we went over the basic event in the Bible that covered David's outlook on Goliath and the Goliath  syndrome the rest of the Israeli army was affected with. I use Free Bible Images Power Points and spice them up with speech bubbles. I use the animation feature in Power Point to make the bubbles appear after the picture is shown - it adds a little action and holds the kids interest better.

For an activity to help us interact with the truth of the story, we flung water balloons at Goliath. Pelted him is more like it. I had planned to write words on the balloons like "faith" and "trust" and "believe" and "God." I never had time though.

For a true teaching activity, you could add the element of choice in the water balloon time. In addition to the balloons having "faith" and "trust" and "believe" and "God" written on them, you could have ones that said, "army" and "weapons" and "muscles." Filling the balloons with different colors of water would enable the choice to make a difference, and you could turn it into a learning game. Read on below for instructions. 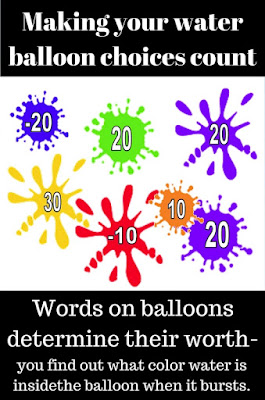 So the idea is to put different color water in the balloons and assign point values to the colors. You write the words that represent dependence on God on the balloons containing colored water worth positive points. If you chose a "faith" balloon and burst it and it has green water in it, you would get 20 points. 30 for a yellow, 10 for orange and so on. Balloons with things we should trust in would be worth positive points - so again, make sure you are writing those words on the balloons that have positive point colored water in them. Words that stressed depending on human strengths and abilities (like "weapons" and "muscles") should be written on balloons containing the negative point colors. The colored water in these balloons would take off points (like the red and the blue in the chart above)

You can find a variety of ways to make these balloons on the internet. Some use paint, some crush colored chalk and mix it with water. Here is one that uses food coloring and corn starch:

How to get the colored water into the balloons? Fill spray bottles and pump it into the balloons that way. Or you can spend money and buy a water balloon pump which is basically the same thing.
at June 08, 2016