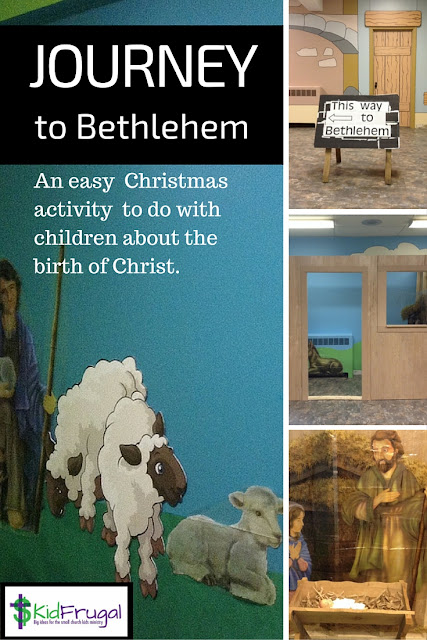 This Christmas season we re-enacted the story of the shepherds in Luke 2 for our children. Remember, this is KidFrugal, so I used what we had on hand. The upscale church might not
like this, but our kids loved it. Here is the script. 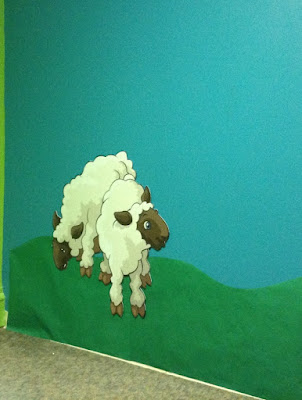 So the first thing I did was to make one of our kid's rooms into the field where the shepherds were. I used some leftover green bulletin board paper for grass. The cartoon like sheep came from Creative for Kids. They are wall stickers which can be re-positioned. I mounted mine on core-board and use command strips to put it up. 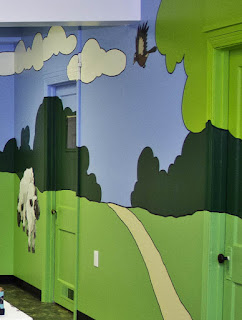 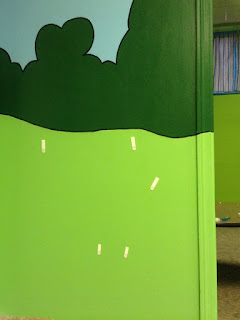 Normally these sheep are part of the wall murals in our main room. You can see the command strips I use. The newer version Creative for Kids makes can be moved over and over again, so mounting them and the command strips are no longer necessary. 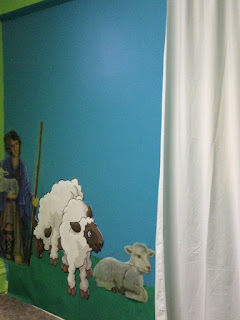 Next, I found some old Christmas scene-setters. I used the shepherd and the sheep to add to my hillside. Oriental Trading has some great Design-A-Room sets for the Christmas nativity.  The curtain hanging to the right is hiding the heavenly host of angels. 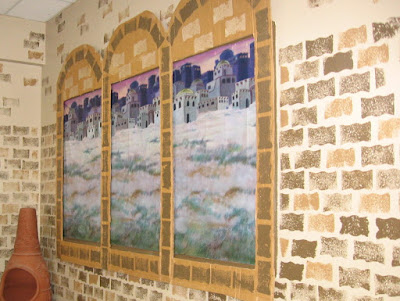 I was fortunate to have over 20 feet of this Bethlehem Town Design-A-Room Background left from a previous project. It actually stuck to the wall because of static electricity. Unfortunately, I did not get a picture of it before it fell down - but it lasted for over a week. I wrapped it around the other 2 walls of the room and it felt like we were on a hillside outside of Bethlehem. 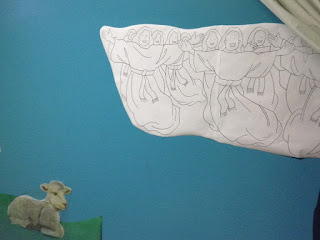 I used an overhead projector to draw these angels for the heavenly host. I had a helper dressed as an angel come in and address the children as if they were the shepherds. Then she pulled back the curtain revealing the host of angels. I also had some bright lights that I flicked on at the proper time, illuminating the whole room. (We started out in the dark, pretending it was nighttime.) 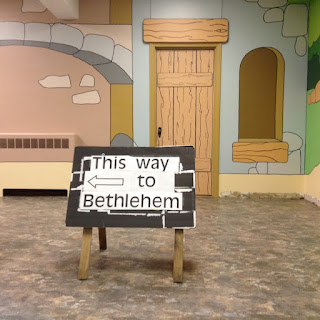 We followed the biblical account in Luke very carefully. After the angels pronouncement, we decided we should go to Bethlehem and see this thing which they had told us about. And how do you find Bethlehem? This old garage sale sign came in handy for that. 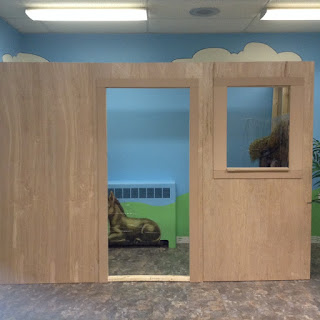 Someday this structure will be a stage with a door and puppet window, but right now it is just sitting there. So I decided to re-purpose it into the stable. (See the donkey in there?!) You could also use an old puppet theater like I have done in the past (read about that here.) 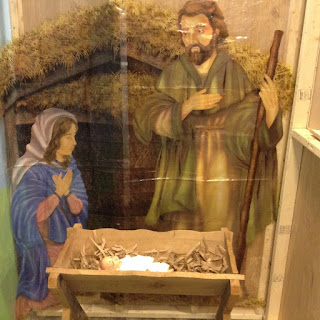 I used the rest of the plastic wall scenery in the "stable." The manger is from our Christmas programs in the past, and I borrowed the baby doll from the nursery. 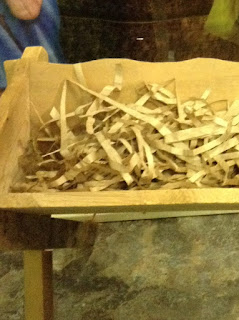 I cut up brown packaging paper on the paper cutter to make the "hay" for in the manger.
I tore an old sheet into strips to wrap the baby Jesus in. Those were the 2 main clues in the script to help us find the baby - a manger, and swaddling clothes.

Here is the script in case you missed it up above.

Cost? Nothing, since we had everything on hand.