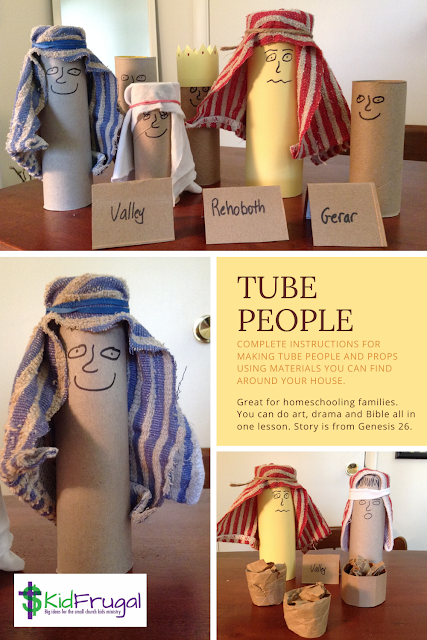 Make these tube people from things you already have around your house.

I coined the term "tube people," because that's what these are. People made from tubes. Complete instructions are in the video.

As parents or teachers, you can use these people to act out Bible stories. Kids can use them for the same, or just for imaginary play. In this day of tech, playing with hands on, kinesthetic items is so important. Tech is great, but I still don't think there is any substitute for good old fashioned creative play to develop the imagination. So during this time of staying at home, here's a great activity for the whole family.

Supplies:
Directions:
Here is the instructable in video form:
These people can be used in any number of Bible story re-tellings. Sometime in May 2020 I will post some links below to scripts I have that could be acted out with tube people. I will also have a link to a video where I actually use tube people to re-enact a Bible story so you can see how to do it (for anyone who feels inhibited, or thinks they are not creative enough to do this.) Keep checking back. 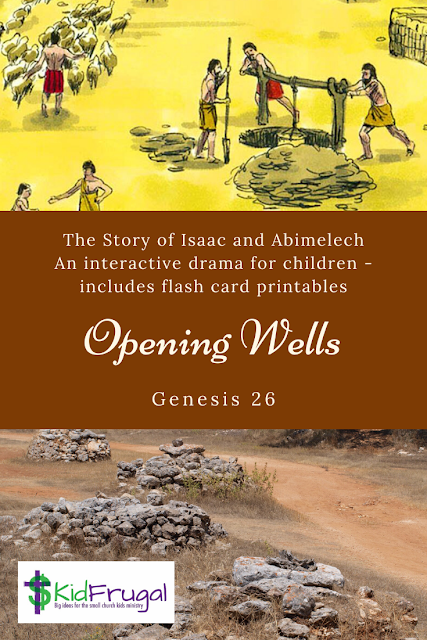 Genesis 26 is about stopping and unstopping wells among other things. This is a fairly simple story with some good applications. I include a drama and flash cards at the end. In the post, "Tube People for Acting Out Bible Stories," there are instructions for making the wells for the drama and also some other visuals you can make with your children. I show you how to tell the story using "tube people" in the post, "Tube People Starring in Isaac & the King." You can teach this lesson yourself at home using the flash cards I prepared and linked at the end of this post.

In Genesis 26, Isaac confronts stopped up and stolen wells with patience and gentleness. Wells were the source of water, an essential resource to life. Stopping up a well usually meant war. According to the notes on Genesis 26:17,18 in the Life Application Bible, filling in someone's well with dirt was one of the most serious crimes in the land. Isaac had every right to fight back when the Philistines stopped up his wells (vs. 15). But he chose not to.

First the Philistines stopped up all of Isaac's wells that his father had dug, because they were jealous that God was blessing Isaac. He moves (actually he is "kicked out" of where he is by King Abimelech) to the Gerar Valley and his servants dig and discover a well of fresh water. The Philistines from Gerar come and claim the spring for their own after Isaac's servants did all the work.

No problem, Isaac's men just dig another well, but again the other shepherds come and dispute over it. Isaac abandons that well too and his servants dig a third time. They strike water again, and this time there is no dispute. Isaac breaths a sigh of relief and names the place Rehoboth which means "room." The idea was that God had made room for him in the land.

Things get even better though. God appears again to Isaac reaffirming his promise to bless him and increase his offspring. Finally, the King himself seeks out Isaac, and wonder of wonders, he apologizes to him and makes a covenant with him that they will not harm each other.

Lessons to be learned from this story?
We need to:

I made some flashcards for telling this story that you can download here.

The DRAMA can be downloaded here.

If you want to print the signs for the wells, you can access them here.
at March 29, 2020 No comments: