Dunkin In the River with Namaan 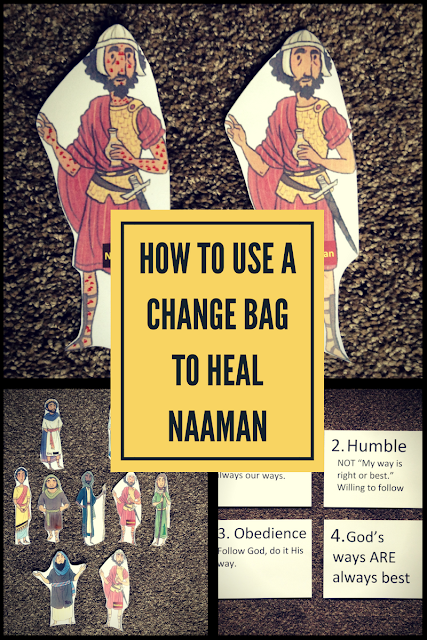 Any Bible story with a visual "change" in it is candidate for a magic "change" bag. Namaan's leprosy is a perfect match. Here's how I told the story.

First, I made some cardstock figures. You can back these with flannel and use a flannel board. I simply used a pocket chart to save the extra work of backing them. These printable Bible character figures are free at Activity-Mom.com.

They didn't have a set for the Namaan story, so I chose appropriate figures for what I needed and colored over the names with colored magic markers. I copied, cut and pasted the Gideon figure into Publisher and added a text box so that I could write Namaan on him. I thought Gideon looked like a soldier and commander, so he worked well for Namaan. 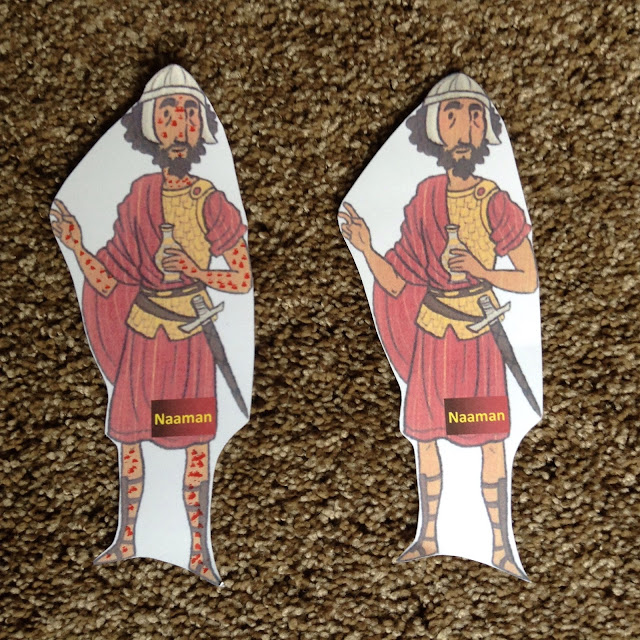 I printed 2 copies of my Namaan figure. On one I made red spots with a magic marker.

I told the story up to the point when Namaan is told to dip in the Jordan River 7 times. I showed the kids a picture of the muddy Jordan and we talked about how unappealing it was, and why Namaan may have been insulted to go wash in it.


Naaman & the change Bag from Joan Eppehimer on Vimeo.

After we "straightened" Namaan out on why he should do this anyway, I got out the change bag which already had a "clean" Namaan in the hidden pocket. I dunked the Namaan figure up and down and we counted 7 times - and then I made the switch and pulled out the clean Namaan. I am no expert at this, but I did all right because they wanted to see how I had done it. If I can do it, you can too.

A change bag is about $25 at this writing. It is a nice prop to pull out once in awhile for teaching purposes. It just changes your lesson up a little - which is always a good thing. I ordered mine from a website called Kidhelper Resources.


After the story, we went over these four points about God's will and obeying him.