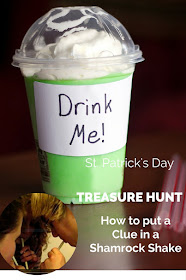 With St. Patrick's Day less than a week away, I thought this post bore repeating. A few years ago, alright, a lot more than a few years ago – when I used to work with teens, we did a Saint Patty’s Day party. The crux of the party was a treasure hunt.

And the piece de resistance was
a clue hidden in a Shamrock Shake from McDonald's. 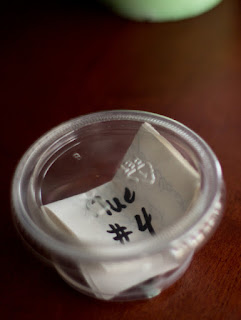 I picked up 2 small shakes and asked for 2 additional medium cups and headed straight for the church. I procured 2 small drinking cups (5 oz. size) and put a typed clue in each one. Then I covered each said cup with saran wrap and made it adhere with a taunt rubber band so no shake would get into the clue cup. (These nice little plastic 2 ounce cups with plastic lids would work great. I've seen them at grocery stores in with the paper plates.) 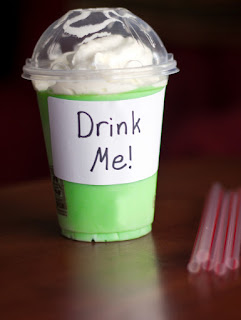 Next, I placed the 5 oz. cups in the bottom of the the medium sized cups. Then I poured the shakes over top and put the lid on and placed it in the room the respective team would enter. On the shake was taped a sign, “Drink Me” and I placed straws next to it. The clue that led them to that room told them to find something in the room that did not belong in there. 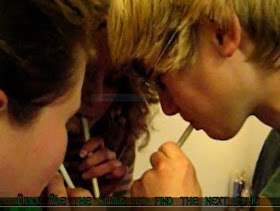 So, I don’t know how sanitary this is, but it was a blast when the kids finally figured out that the next clue was buried in the shake.  They drank so fast, I ‘m not sure their germs had time to intermingle in the cups. But if you are a germaphobic, you could just provide one straw. 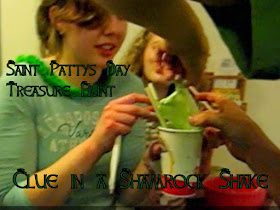 Here is a picture of the clue coming out of the shake.

You can look at all the clues from the treasure hunt here. It is a bit difficult to understand, but you might get some ideas.

I took a picture of the sanctuary for one of the clues, and cut it apart like a puzzle. We had a clue hidden in a pew Bible - so the picture showed them which pew to look in when they put it together. I drew an arrow on the picture.

The final clue was to look in someplace "very cold." It treasure was hidden in the only refrigerator the church has. There was a note in the freezer just in case they looked in there. It said, "not this cold."